Fortnite Chapter 3: How to get the Last Present of Winterfest 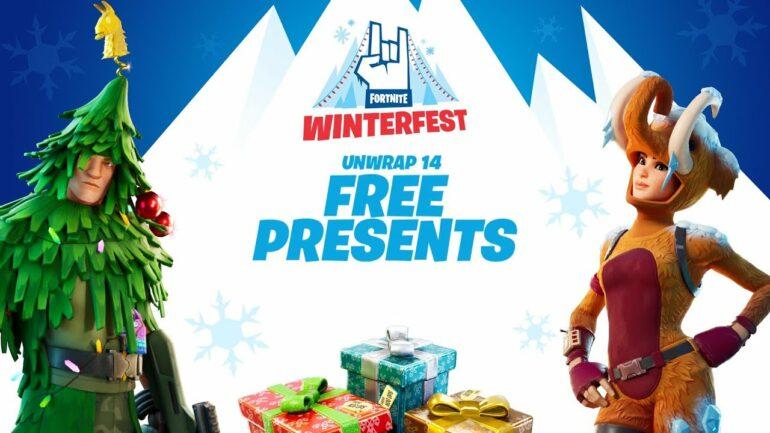 Fortnite Chapter 3 Season 1 has started with a bang. The Winterfest 2023 event was the cherry on the caked during the festive season, quite literally giving Chapter 3 a great start. The Winterfest event has featured tons of challenges and surprises to the players all month long. But now the question of where to find the last present stands tall. To know more about this, please continue reading the article down below.

The Winterfest event in Fortnite had a great start and is approaching the end within a couple of days. Players received many free gifts throughout the span of 14 days in terms of skins, charms, emotes, sprays, etc. But as of now, players are a bit confused about where to find the last present. When you look at the ‘open _ present’ counter, it still indicates that there is one gift still left for grabs. But there are none that you could find in the Cozy Lodge. This takes us to the confusion that has been rising among players, what is the last present and how can you get it?

Practically speaking, there was supposed to be a total of 14 free presents that players will eventually get the chance to collect in the game, during the event. And you have possibly collected all 14 of these, hence no more actual gifts are there in the Cozy Lodge to collect. Then why does the counter indicate otherwise? 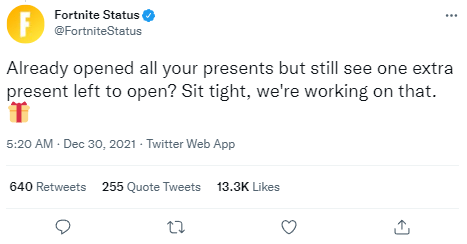 You would remember that Fortnite had countered a massive server issue that didn’t let players play the game for some hours. However, Epic Games have officially fixed the issue and players soon were able to log in to the game. Following this issue, the official Twitter account of FortniteStatus tweeted that said “Already opened all your presents but still see one extra present left to open? Sit tight, we’re working on that”. This indicated that after the distribution of 14 predetermined gifts, the developers have decided on giving away another one of some kind.

Many prefer to believe this to be unplanned and only happened after the recent server issue. In this way, Epic will compensate for the inconvenience that was caused by them. So for now, we really don’t have any idea of which form this mystery gift will take. Also, you don’t have to do anything special to receive the mystery gift and just have to login in and check till 6th January.