Sleep on the floor and remove leeches now in VR.

Great news for survival lovers, Green Hell is about to get a VR update somewhere in 2021. Now you can die from a snake bite in virtual reality and cry in a corner.

Sources have it that the developers of the game Creepy Jar have officially partnered the Incuvo studio, a Poland based company, to port their survival adventure game Green Hell into Virtual Reality. The news update has been officially listed in Incuvo’s official website. Incuvo revealed that the official VR version of the open-world survival game will arrive as scheduled by the Q3 2021. 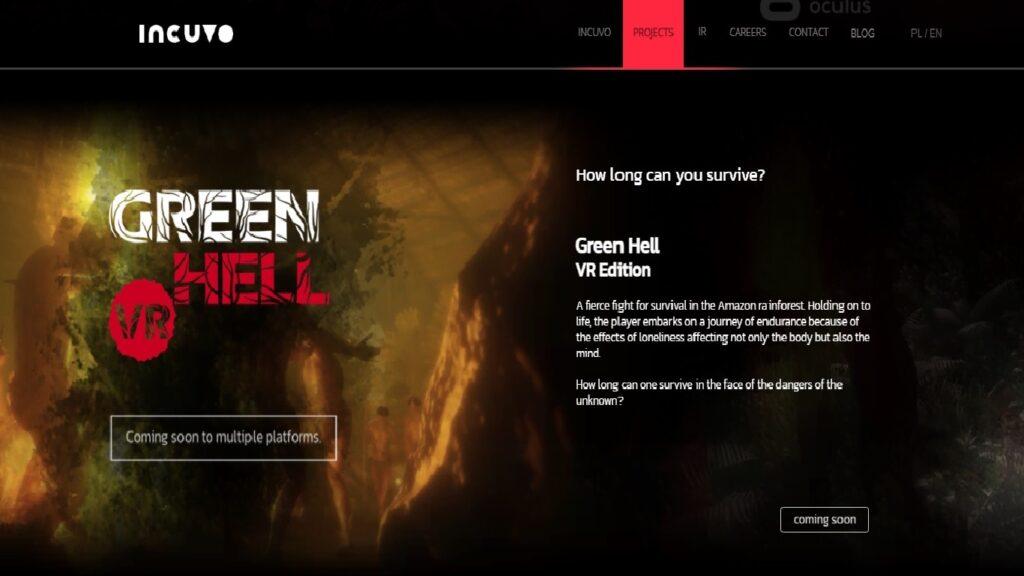 The VR version will be available for PC and the Oculus Quest for the time being. We still don’t know much about the project except that it is happening. We currently don’t know whether the VR update will be included as an update to the original game or will be a separate title as a paid DLC. Andrzej Wychowaniec, CEO of Incuvo, has shared that they are very excited to hold the full potential of the game in virtual reality.

As stated that they have finished with the pre-production for the project and are now focusing on the Alpha version hints that the release date might just be a few months behind. By his statement, we also understand that they are really happy about the development process and the results. They have high expectations for the game like we all do.
Green Hell is a survival video game that was originally developed by Creepy Jar, a Warsaw-based independent game developer, made with the core team of former Techland Employees. The game was initially released on 29th August 2018 and had a major story mode CO-OP update on June 18 2020, which was a great deal and attracted many players. Since its release, the game has received various mass changes, updates and patches that are always a good sign.

The game itself is great and has a great concept based around survival in the wilderness of Amazon. The game always gets compared to ‘The Forest’ but they have their major differences, like the learning curve in Green Hell is quite difficult and you would like to die multiple times in the beginning but it gets better once you figure out the mechanics of the game. It focuses hard on the realism and every detail to provide a proper experience to the players. Now with the upcoming VR update, this quest of your staying alive while progressing the story will leave you petrified.

The atmosphere of the game might seem similar but you should try this game at least once, if you already haven’t, to experience the series of new aspects it actually has to offer in the traditional survival genre. Creepy Jar has a whole team of developers with enormous experience in making popular games throughout the years and Incuvo has also shaped many VR games quite well. So, it would not be an understatement to say that they know what they are doing.

We hope that the development process gets properly processed within time so we do not have to wait for another delay disappointment. The game recently had an update to re-grow trees, which is again, promising touch by the developers as they listened to what the community wants. We may also see new DLC updates that advance or introduces a new storyline in the future, which on paper is a great would be updated.

We are really looking forward to seeing how the game shapes up and will be steady to inform you about further updates from the developers. So be sure to follow us on all social media and till then, Happy Gaming!