This would be fun!

Rocket League is offering a new way to celebrate American Football’s biggest event NFL Super Bowl, in their own style.

It has been nearly a month since the ‘NFL Fan Pack’ has dropped and Rocket League Developers are bringing something more exciting. They will be celebrating the upcoming big game that is coming next week, with the NFL Super Bowl LV Celebration.

The @NFL Super Bowl LV Celebration is coming to Rocket League! Join us Feb 2-8 as we unveil our brand new game mode, Gridiron, Event Challenges, and the return of the NFL Fan Pack. #RLGridiron

It is the official game event of Rocket League in collaboration with the NFL. This event’s main showcase is a new game mode called ‘Gridiron’. Apart from the new game mode, there are some other inclusions which are also exciting, like many Event Challenges and the return of the favourite NFL Fan Pack.

Rocket League players will know that the game is based on Soccer where the team with more goals wins. The Gridiron exchanges the soccer field aesthetics with an American football field, fitting to the event. The field is also occupied with hash marks and the NFL logo at the 50-yard line.

The rules for Gridiron are different than the usual Rocket League games and they can be found below:

Previously, Rocket League have shown us its love for the NFL by collaborating with them on their ‘NFL Fan Pack’ on Dec 17th 2020. 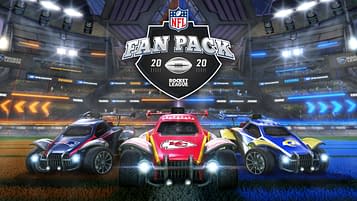 The NFL pack comes with cool and slick Octane Decals for all of the NFL’s 32 teams. It was available for purchase until Dec 28th 2020 through the game’s in-game store for just 800 Credits. With the new event, it will be available again, so be sure to support your favourite NFL team by representing their decals.

Psyonix has announced that the event will go live on February 2. The Gridiron playlist along with the Event Challenges and NFL Fan Pack will be available from February 2nd to February 8th.

Rocket League has gone free-to-play recently and it surely brought a lot of new players to the game. It is really a nice game to both enjoy and play competitively. We are excited and looking forward to the new Event just like everyone else.