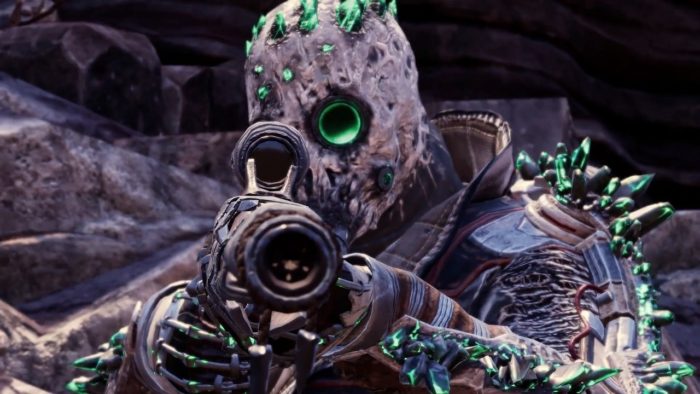 Outriders has faced its own sets of UPs and DOWNs but it has still managed to become a piece of gaming creation that the people are enjoying. If we look past the poor optimization, Co-op issues and minor bugs, there is a fun game that we can play with friends or even go solo and enjoy all the hours it has to offer. Outriders can be defined as a looter-shooter title and it has done a great job in fulfilling that aspect of the game.

Set in a post-apocalyptic period where Earth has been destroyed and the protagonist ventures into a newfound world, the game intends to bring different weapons and gears with various unique abilities for each of the four classes in the game.

There are some legendary weapons available in the game but it needs some serious grind and XP gaining to have them. Outriders is a difficult game in general and thus the better weapons and gear will impact your gameplay in every sense. Outriders is not just a looter-shooter game as it includes four player classes, each having its own unique sets of abilities and skills for combat.

The weapon mechanics and range are also pretty great in the game and players can find nearly any type of weapons they like, from submachine guns, Pistols, AR, LMG, Sniper rifles, shotguns, etc. This article tends to draw players’ attention to the use case of Sniper Rifle in the game and lists the top 3 Snipers of our choice that are highly recommendable.

Why do you need a Sniper in Outriders?

Yes, indeed, the fun and usefulness of AR, SMGs, LMGs and Shotguns are the most in a game like this. When there are plenty of enemies surrounding you or in a boss fight, guns with impactful damage, more magazine size and lesser reload time seems to be the most useful to knock down multiple enemies or deplete the enemy boss’ grand health bar. But Sniper rifles can also be helpful, especially when you’re playing in Co-Op with friends.

Not every single of the four players needs to engage in close or mid-range combat. For a proper and fruitful battle, some long-range assistance is required. This is where Sniper rifles come in handy as they offer massive damage from long range without its user having to be exposed to enemy attack in the middle of a battle.

If used properly and as it is intended to be, Sniper users can knock down multiple players from a range to support their friends that are engaged in close combat.

After stating the usefulness and effectiveness of Snipers, here is a list of our favourite picks in the ‘Top 3 must-have Snipers in Outriders’ category.

Be sure to follow us for more Guides, How to(s), Tips & Tricks for Outriders.