Play the full-version of ‘Crash Team Racing’ till 5th January

Race with your friends and get tilted. 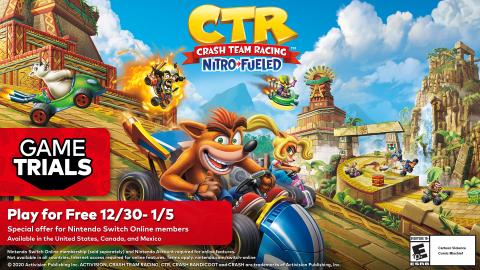 Great news for Nintendo Switch Online Members during this festive time! Nintendo is offering a free trial for Crash Team Racing Nitro-Fueled from 30th Dec and is available till January 5th 11:59 PM PT. The exciting part is that it includes both local and online multiplayer modes. A great opportunity for you and your friends who are already a Nintendo Switch Online member and can have the first-hand experience of the game that we all love. If you are looking forward to buying this game for your Switch, then this is the perfect time to try and test it for yourselves.

The game is a go-kart racing type video game that is developed by Beenox and published by Activision. The game was initially released for Playstation 4, Nintendo Switch and Xbox One on 20th June 2019. The game has won many hearts along with The Game Award for Best Sports/Racing Game in 2019, Best Racing Game of 2019 by IGN and Best Racing Game of 2019 by Brazil Game Awards (BGA). The game includes in the ever-popular ‘Crash Bandicoot’ franchise of video games which was originally developed by the well-known American game developer, Naughty Dog studio.

The announcement was officially laid by a tweet from Nintendo of America’s official Twitter handle on 29th Dec 2020.

Get back in the driver’s seat with Crash and friends! The full version of Crash Team Racing Nitro-Fueled is now live for #NintendoSwitchOnline members until Jan 5 at 11:59 PM PST! https://t.co/T9neO0dl4y pic.twitter.com/HNIJdg5nc7

This remastered brilliance is surely a matter of great surprise to the switch owners. As a part of the whole membership program, Nintendo Switch Online often gives limited time full access to certain video games occasionally. These types of games are mostly the first-party option as a mean of promotion. Thus, CTR Nitro-fueled is a great surprise as it is a third-party game.

It is obvious that the main competition of Crash Team Racing NF is Mario Kart 8 Deluxe thus the reception of the first one often gets out looked by the switch owners. These free game trials are a great way to provide the full game experience where people can try new titles and realize what they were missing out on. In the past we have seen this strategy many times successfully, one recent example being the free time-limited access to Call of Duty: Black Ops Cold War (on which you may like to refer to this article). This is also a positive way to promote games and increase sales, which is a win-win situation for the players and the game’s developers.

This also teases a possibility of more Crash Bandicoot games for Nintendo Switch in the future. Everyone is excited about what more is to come to the wonderful game console ‘Nintendo Switch’. The scope is huge and the future is bright for gaming. Happy New Year! To everyone and have a fantastic year ahead.